When Gustav J.A. Trostel purchased his lot on the corner of Terrace Avenue and Belleview Place, one critic said, “Crazy people had to move so far out of town.” The newly platted neighborhood still looked like the farm land that it once was, and beacon from nearby North Point Lighthouse would sweep across the empty landscape night after night.

In the year before the Trostels came, only one building – -a farmhouse on Summit Avenue — existed in the five square blocks bounded by Belleview Place, Downer Avenue, Terrace Avenue and Park Place. 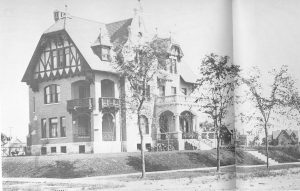 the land to the north of it was swampy with willow trees, patches of quicksand, and a pond. Children from the area built a raft there and used to swim in the pond which was near the present intersection of Terrace Avenue and Lake Drive.

In spite of the elegance of their new mansion, the Trostel family had the hardships of pioneers on moving day. Wagon loads of furniture came up Lake Drive and their contents had to be trundled across a field to the house. One of Gustav’s daughters remembered that the wagon carrying their piano bogged down in the mud and the movers had to off-load the instrument. Trostel went to his tannery and arranged for a heavier wagon and a larger team of horses to complete the job.

The new mansion must have attracted a lot of attention standing there, with all of its finery, in the middle of a field. Terrace Avenue was later extended to Gilman Street (now Belleview Place) but Trostel had it graded just far enough to reach the new driveway. Beyond his manicured lawn, roughly-chiseled vacant lots spread out in all directions.

The money for Gustav’s handsome residence came from the tanning industry. By the 1890’s Milwaukee leather had become a household word in the United States and the city claimed to have the largest tannery in the world. In fact there were twelve tanneries here and, without exception, they all were owned by German immigrants and their families. The industry employed 3,000 workers and processed $7,000,000 worth of leather annually.